The other night I had an e-mail from an American comic journalist asking me for British fanzine information about Jack Kirby.  I was baffled why he should contact me of all people.  My comic Gods are Tardi, Druillet, Caza, Ledroit, Bilal, Gal and similar European artists, and I know little about the origins of modern day superheroes.  So I gently explained this to him, but he insisted that maybe I could get in touch with my friends who, he was sure, would have the information on Jack Kirby he was after.  Of course I knew they wouldn’t – superheroes are not a subject often discussed in my social circle, unless it’s a negative view of them as in Marshal Law or Brats Bizarre.

Maybe because of this e-mail exchange, or maybe because I’ve been proofreading the deluxe collected edition of Marshal Law (due out next April from DC Comics), but I had the most extraordinary nightmare that night.  In it, a group of superheroes, splendidly cloaked and jazzled, were rushing down to breakfast, running on one leg towards me, in full “Crisis” mode, with mandatory gritted teeth and clenched fists.  Crying out “Aiee!” as they leapt through the air to seize a packet of cornflakes, desperately diving for the fridge to grab the milk, heroically helping themselves to toast, and then hurling themselves at the cooker to scramble eggs.

Mercifully, that’s all I can remember; I woke up with a start and couldn’t understand why I found this dream so disturbing.     Then I realised it was because someone was missing: a cereal killer.  Marshal Law.  He would have shoved those heroes’ heads in toasters, fried their asses and turned this Breakfast of the Vanities into a Bonfire of the Vanities.  Now that would have made for a most satisfying dream.

Okay, it’s easy to criticise, but how would I interpret superheroes if an editor foolishly let me loose on the genre?  Brats Bizarre – which appeared in Toxic!, brilliantly illustrated by Duke Mighten and co-written with Tony Skinner – gives you some idea.  Living in a sentient house run by their dubious butler Bates, they indulged in every imaginable teenage excess.  I’ve written about them in a recent issue of Comic Heroes and the images here show their very different attitude to their superpowers.  More recently, Channel 4’s excellent Misfits did it bigger and better and shows the Young Ones potential in telling it like it is, but I still think Brats has something pertinent – and certainly offensive – to say, to challenge the world of fantasy currently on offer. 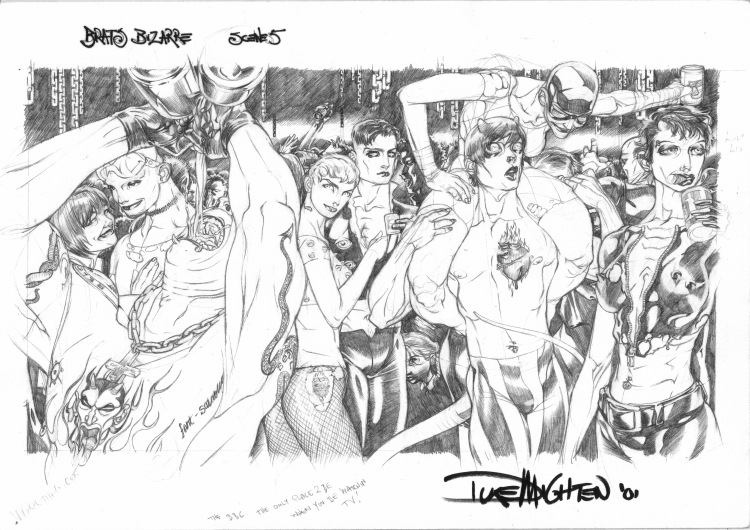 Life in the Brats Bizarre mansion, 2001.